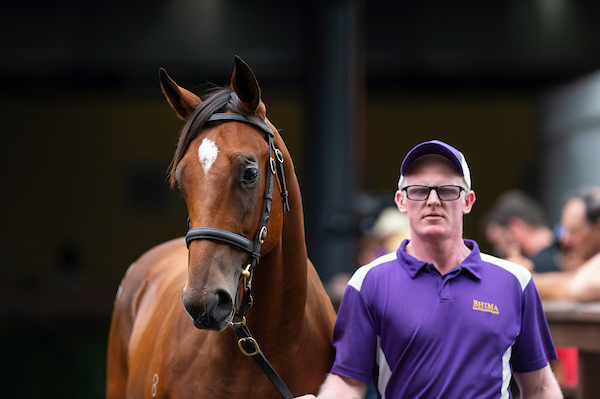 The first yearling sale of the year started off with a bang for Bhima Thoroughbreds with the launch of
the Kick Sales Platform seeing all but two of their 24 offerings find new owners at the Magic Millions
Gold Coast Yearling Sale.

Phoenix Thoroughbreds and Aquis Farm quickly helped Bhima reach the top of the leaderboard when
they bought Lot 34, a Redoute’s Choice half-brother to Group 1 winner Stratum Star for $1.6 million. The
first Bhima offering through the ring, the colt from Purely Spectacular shot to the Magic Millions lead
early on Day 1 and wasn’t dethroned until the end of Book 1. Even more impressive was the colt ending
the yearling sales season as the most expensive Redoute’s Choice yearling sold in 2019 in a year that
saw the stallion clock in five seven figure yearlings.

The successes rolled on from there over the following four days with the second most expensive of the
rest of the lots bookending their sale.

That second most expensive offering came during the Saturday night session when a Pierro colt from
Mama’s Choice fetched $500,000 from James Bester, Aquis Farm, and Gelagotis Racing to be the fourth
most expensive Pierro yearling sold in 2019. By Listed winning Mama’s Choice, the colt’s stakes winning
granddam is a half-sister to two-time Group 1 winner Hollow Bullet.

A quality filly by top notch first season sire Deep Field was the consignment’s highest priced filly of the
sale when bought by James Bester Bloodstock and Eric Lucas for $320,000 on Day Two.

From Dance Card, the filly continued a line of success for Bhima with the family. She is a half-sister to
exciting Rome, who Bhima sold at the same sale for $1.05 million the year before. That colt went on to
finish fourth in the Group 3 Breeders’ Plate to start the 2018-2019 season and looks like he’ll be an
exciting prospect for the future. Her dam’s half-brother Kaepernick was sold by Mike and Kate at Magics
in 2013 for $400,000 to John O’Shea. He developed into one of Bhima’s star graduates with multiple
Group level placings including a win in the Group 3 Southern Cross Stakes.

It paid off when their Lot 59 became the stallion’s most expensive filly of the sale and third most
expensive of the stallion’s yearlings in 2019 when bringing $125,000. Bought by Triple Crown
Syndications, the grey filly is a half-sister to Bhima Group 3 placed graduate Top Me Up with stakes
horses throughout her first three dams.

The draft’s connection to Scissor Kick ran strong on the Gold Coast with Bhima also selling a Sebring colt
from Scissor Kick’s winning full sister Rebound for $320,000. Sold to Gai Waterhouse and Adrian Bott,
the colt will be joining the same barn that trained his winning sire. Hailing from the family of bluehen
broodmare Hasili, the colt is the first foal from his dam.

In all, Bhima sold 21 of its 22 lots sold for seven figures with eight lots bringing $250,000 or more. The
farm ended the sale waith the second highest priced lot for an average of $267,273 and a gross of $5.8
million that put them in the top 10 of all vendors with five or more sold.