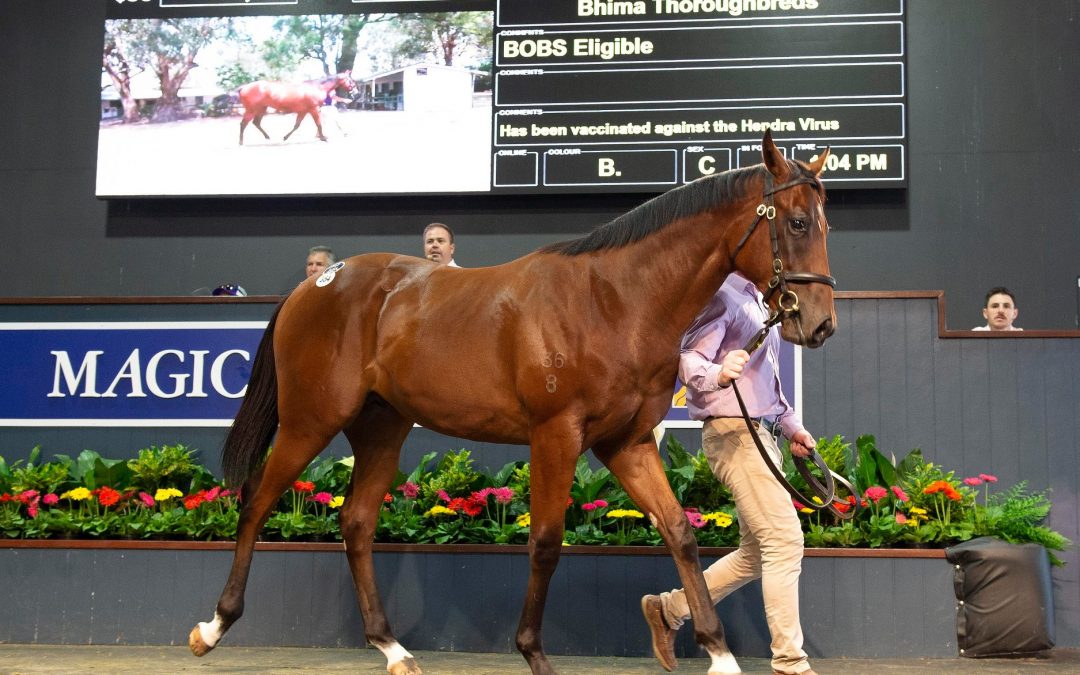 The 2020 Magic Millions Yearling Sale on the Gold Coast deemed an exceptional start to the year for Bhima Thoroughbreds with a high clearance rate and strong average reached for their 22 yearlings heading off to new homes. The farm also announced their generous support for the Rural Fire Service which hits close to home for the industry as they fight bush fires across the country.

It was the second year in a row at Magic Millions that Bhima offered the top priced yearling by the irreplaceable Redoute’s Choice. Catalogued as Lot 354, the colt out of Hussonet mare Gresset also provided the top priced horse in the farm’s draft as he was knocked down to the $1.1 million bid of Zhiqiang An. He now heads to the stable of Gerald Ryan at Rosehill.

A timely pedigree update to Lot 226, an Exceed and Excel colt out of Dehere mare De Groove, generated plenty of interest throughout the week with his full brother Big Party winning the Group 3 Bauhinia Sprint Trophy in Hong Kong. In a fierce bidding war from two Hong Kong parties, the colt was finally knocked down to the bid of George Moore Bloodstock for $900,000.

Lot 631, a filly by Exceed and Excel out of Group 1 winner Perfect Fit, also sold for $300,000 to Belmont Bloodstock, McEvoy Mitchell Racing and Milano Bloodstock.

The filly by Champion sire I Am Invincible out of Magic Millions 2YO Classic winner Augusta Proud was always going to be well sought after heading into the sale. Catalogued as Lot 102, many keen eyes watched as she went under the hammer and while bidding was slow to begin, things rapidly heated up and she was eventually knocked down to American interest Stonestreet Stables for $750,000.

David Ellis of Te Akau Racing was also keen to secure an I Am Invincible filly from the draft and went to $320,000 to acquire Lot 129, a filly from Shamardal mare Berimbau.

Three horses were consigned on account of astute breeder Robert Crabtree of Dorrington Farm which added some quality pedigrees to the mix. The I Am Invincible three-quarter-sister to unbeaten mare Black Caviar at Lot 779 was purchased by Anthony Cummings for $400,000.

The half-brother to Group 1 winner Palentino, a colt by Champion Sire Snitzel (Lot 616), was purchased by Gai Waterhouse and Adrian Bott Racing for $300,000, while the third and final horse (Lot 183), a filly by first season sire American Pharoah out of multiple stakes winner Ciguaraya, went to Aquis Farm for $115,000.

There was a lot of anticipation for the first crop of yearlings by the highly credentialed Triple Crown winner and Lot 24 was no exception. The good walking filly out of More Than Ready mare Vivi Veloce paraded exceptionally and caught the eye of Spendthrift Australia who outlaid $375,000.

Throughout the entire sale the fillies were in high demand and Ciaron Maher Racing walked away with two from the draft of Bhima. Lot 614, a filly by the ill-fated Sebring and closely related to Horse of the Year Dissident, fetched $270,000, while Lot 680, a filly by leading sire Not A Single Doubt out of Unbridled’s Song mare Registered Nurse, was purchased for $400,000.

Overall, Bhima sold 22 of its 24 lots offered with an impressive 20 lots reaching six figures and eleven selling for over $250,000. Bhima Thoroughbreds now head to the 2020 Inglis Classic Yearling Sale where they will offer a draft of eight yearlings.