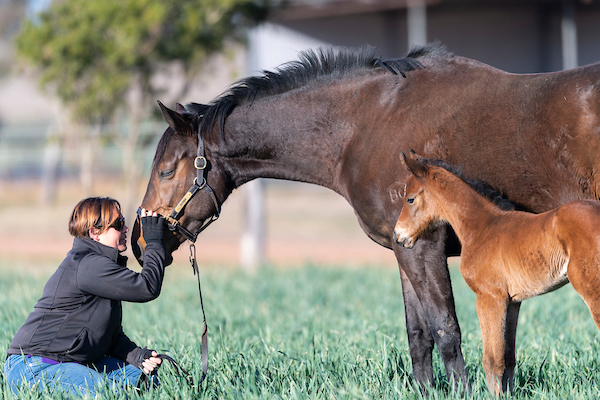 Bhima sent one select mare to the Inglis Chairman’s Sale with a well-bred daughter of Fastnet Rock. The Irish-bred Misty Islet is from a Group-winning sister to Butterfly Cove, the dam of two champions including Group 1 producer Misty for Me, and a half-sister to Champion 2YO Fasliyev.

In foal to Dundeel, Misty Islet entered the ring early in the day at Lot 9 and was quickly acquired by Duke Property Group for $200,000.

Bhima also consigned 17 mares in the Australian Broodmare and Weanling Sale which took place over the same weekend.

The farm’s draft was led by the Group 2 placed daughter of Savabeel, Placement (Lot 364). From a half-sister to Group 1-placed Ambitious, the dam of Listed placed Berkshire Lady was sold for $100,000 to RIFA Mustang.

Being the dam of two winners from two runners, she is in foal to So You Think with the mating bred on the same cross as two-time winner Think Babe.

Andrew Williams and Lime Country joined forces to secure the second most expensive mare of the draft in Let’s Lunch (Lot 292) for $70,000. A full sister to Listed-winning Dinner Date, Let’s Lunch is from a half-sister to the dam of Press Statement and is in foal to Epaulette.

Unraced mare Maiya Nova rounded out Bhima’s top three offerings at the sale when D Hanley purchased her for $58,000. From Group 1-winning Bonanova and a half-sister to two stakes winners, she is carrying a Lonhro three-quarter sibling to her winning runner Romaiya.

She has produced two winners from three to race with her current mating bred on the same cross as five stakes winners including Group 2 winner Obsequious.

Sixteen of the 18 horses across the two sales sold to new homes for a clearance rate of 88.89 percent. Bhima had the distinction of selling the highest-priced mares in foal to both So You Think and Mikki Isle, keeping up their tradition of selling headline horses for sires this year.