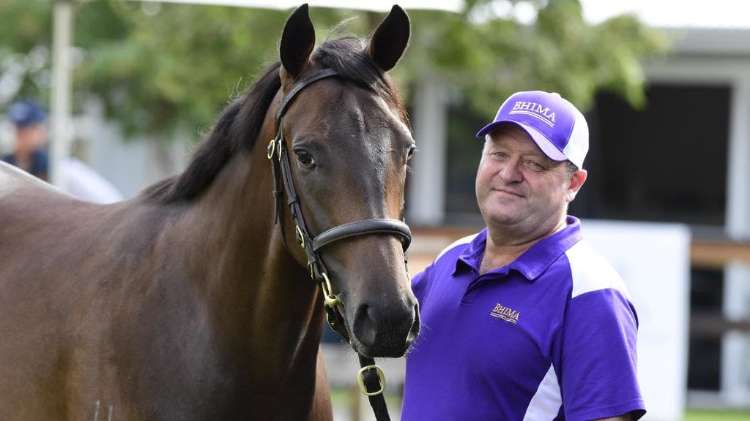 Mike Fleming honed his skills with an acknowledged master of the thoroughbred trade and mentor to many young Kiwis, Sir Patrick Hogan. The expatriate New Zealander also pays tribute to Norm and Dean Hawthorne who set him on his way to establishing a successful business in the Hunter Valley.

These days, Fleming and his wife Kate operate Bhima Thoroughbreds and the nursery is both a respected and successful one with a track record to be proud of and the confidence of the industry.

Fleming’s earliest roots are in Christchurch where he inherited his love of thoroughbreds from his father and he worked for a number of local trainers on leaving school before pursuing a career as a jockey.

He enjoyed success with a number of winners before the scourge of increasing weight forced his retirement and with it the need to find another fit within the industry.

“When I moved north from the South Island one of the first people that had a major influence on the direction I took was Norm Hawthorne from Paramount Lodge,” Fleming said.

“I worked hard for five years at the old Fieldhouse property at Matamata and then Station Road. That’s really where I got involved over that period with Norm’s son Dean.

“That’s still got a fairly big influence on Bhima now through Jonathan Munz and GSA Bloodstock.”

“During my time with Patrick was where the ‘stand behind what you sell’ approach comes from,” Fleming said.

“During my time with Patrick was where the ‘stand behind what you sell’ approach comes from.” – Mike Fleming.

“The spending, the product and what you put in to market – that’s probably the biggest thing Patrick taught me.

“I was at Cambridge for four years and my main job there was running and managing Monarch Farm where all the dry mares were during the season. At the end of the breeding season it rolled into the yearlings and Karaka and then Sydney at Easter.

“Then there was the way Patrick went about marketing, the attention to detail, the way he always put the horse first and always stood behind what he sold.”

Fleming said they were key factors in Sir Patrick being rewarded with such a level of repeat business from the most prominent buyers around.

“I think that’s why people always had the confidence to buy the Cambridge Stud product.”

Then followed the chance to move to Australia and to the very heart of the breeding industry in the Hunter Valley.

“I spent my time with Cambridge Stud and through working with Marcus Corban, it gave us the opportunity to move to Brooklyn Lodge,” Fleming said.

“With my wife Kate being an Australian, the opportunity to move there was something that really appealed to us.

“We had seven years at Brooklyn and were well supported by a lot of New Zealand breeders that were breeding mares in the Hunter.

“We had seven years there and we got a lot of New Zealand breeders that were breeding mares in the Hunter.” – Mike Fleming.

“Obviously, Patrick Hogan was one of them and whether the Kiwi ties helped or what, it was the support of Pencarrow Stud, Wentwood Grange, and with my association with Dean Hawthorne we had GSA and Jonathan Munz come on board.

“After seven years there the opportunity came up to lease Broadwater and a lot of those clients and relationships that had been built up, probably going back 20 years, followed with us and gave us the support to set up our own business.

“One of the greatest parts of this game is that while it’s much about the horse, it’s also about the people.

“When a lot of these breeders and people have faith in your product they tend to follow where you go. We’re very lucky that we had the support of our clientele.”

The step into farm ownership

The natural progression to owning and operating their own operation subsequently followed and Broadwater morphed into Bhima Thoroughbreds on a 740 acre property in the Hunter.

“With all the good horses to have come from Bhima it is an important farm in Australian breeding history, therefore the name is familiar with success. That’s why we chose to go back to its original name,” Fleming said.

“It wasn’t so much knowing what the name Bhima meant, it was where it stood within the Australian breeding industry.

“People know many good horses have come off there. You can go back to the days when Biscay stood there, he is buried there and his stallion box is still there.

“It seemed an easy tool and a way of resurrecting it to the way it was.”

“You can go back to the days when Biscay stood there, he is buried there and his stallion box is still there. ” – Mike Fleming.

Bhima offers full-service broodmare care from preparing for covering through foaling, foal handling and weaning, as well as sales preparation.

But at this stage, a move into the stallion business isn’t on Fleming’s agenda.

“We’re very happy with what we do. I think one of our big strengths is the backing we get from our clients is because we don’t stand stallions,” he said.

“It’s an advantage for farms like Bhima. Your clients can send mares where they fit rather than feeling obliged to breed to horses that you might be standing on your own property.

“That’s a positive from a Bhima point of view that we don’t have a stallion. I wouldn’t say never, but I can’t say that it’s something we’re looking at in the near future.”